ProxiGroup’s UHF RFID system may next be installed across all distribution sites, in order to make parcel shipping more efficient, as well as boost customer satisfaction.

Polish national postal service Poczta Polska (Polish Post) has piloted a radio frequency identification-based solution from ProxiGroup to improve the efficiency of its distribution center. The two-week pilot, which ended last month, tracked 1,000 parcels via ultrahigh-frequency (UHF) RFID tags attached to them as they moved through zones within its Kielce facility. The pilot found that parcels could be tracked in real time, eliminating the need for bar-code scanning.

Polish Post launched the pilot of ProxiGroup’s RFID technology to determine whether the system could make its service faster and more accurate. The postal company competes with other private carriers in Poland that have proven to be faster at moving parcels. In 2013, the Polish Post earmarked 250 million Polish zloty—about $69.5 million—for the modernization of its logistics, among other improvements, to boost its efficiency.

The problem with that process, explains Wlademar Dulniak, Polish Post’s project manager, is that it relies on the time-consuming and error-prone manual process of scanning. “The recording time depends on the people operating the process,” he says. For instance, when each load of parcels is received, an individual must physically locate the corresponding label and scan each tag. Sometimes, a label could be missing, or the scanner may not be able to scan it, while in other cases, workers might need to input the bar-code number manually, which could be keyed in incorrectly.

“All of these problems also have direct impact on the quality of service,” Dulniak states, “[and] cause unnecessary loss of time.” Therefore, he adds, the postal company investigated automated solutions. “Application solutions based on automatic identification technology, on shipments and registration of events, will allow the elimination of errors that occur when scanning bar codes.”

ProxiGroup, according to Curtis Shull, the company’s CEO, is a U.S.- and Europe-based technology company that sells computer-aided design (CAD)-driven, cloud-based software known as ProxiTrak, for use with Internet of Things (IoT) systems. The company boasts a solution that uses CAD site surveys to quickly set up its IoT-based RFID reader infrastructure, which is capable of providing real-time visibility into the zonal movement of tagged items. After agreeing to the pilot with Polish Post, Shull says, the firm was able to set up a system covering a large percentage of the distribution center, involving four readers and 16 antennas, during the course of only four days.

The installation consists of Alien Technology readers and antennas located at the receiving and shipping area, as well as zones to which parcels are routed. The postal company set high expectations for its accuracy testing. It wanted to ensure that the tags could be read no matter what materials were inside and around parcels, and that that it could see them moving in real time.

ProxiGroup attached Comex tags to a total of 1,000 parcels, ranging in size from 6 inches to several square feet, and containing objects made of metal, paper, liquids, wood and Styrofoam. The technology company developed software that was loaded onto SATO RFID label printers, explains Aleksandra Sękowska, ProxiGroup’s CFO. The printers encoded each bar-code’s Universal Product Code (UPC) directly onto the Electronic Product Code (EPC) tag, so that an RFID tag read could be linked to the same data as a bar-code scan.

When a parcel was received for shipping, staff members at the receiving area could simply scan the bar code that came with that package (from the digital order), and the SATO printer could use the ProxiGroup software to encode the UPC with the EPC number. The label was then attached to the parcel.

Once the parcel began moving throughout the facility, the data was collected without requiring a bar-code scan. However, Polish Post also scanned bar codes for redundancy purposes. Those scans, Sękowska says, could cause delays—sometimes requiring an hour to scan each 200 parcels, as well as the time for the data to be uploaded. The RFID reads, on the other hand, could be accomplished within seconds. 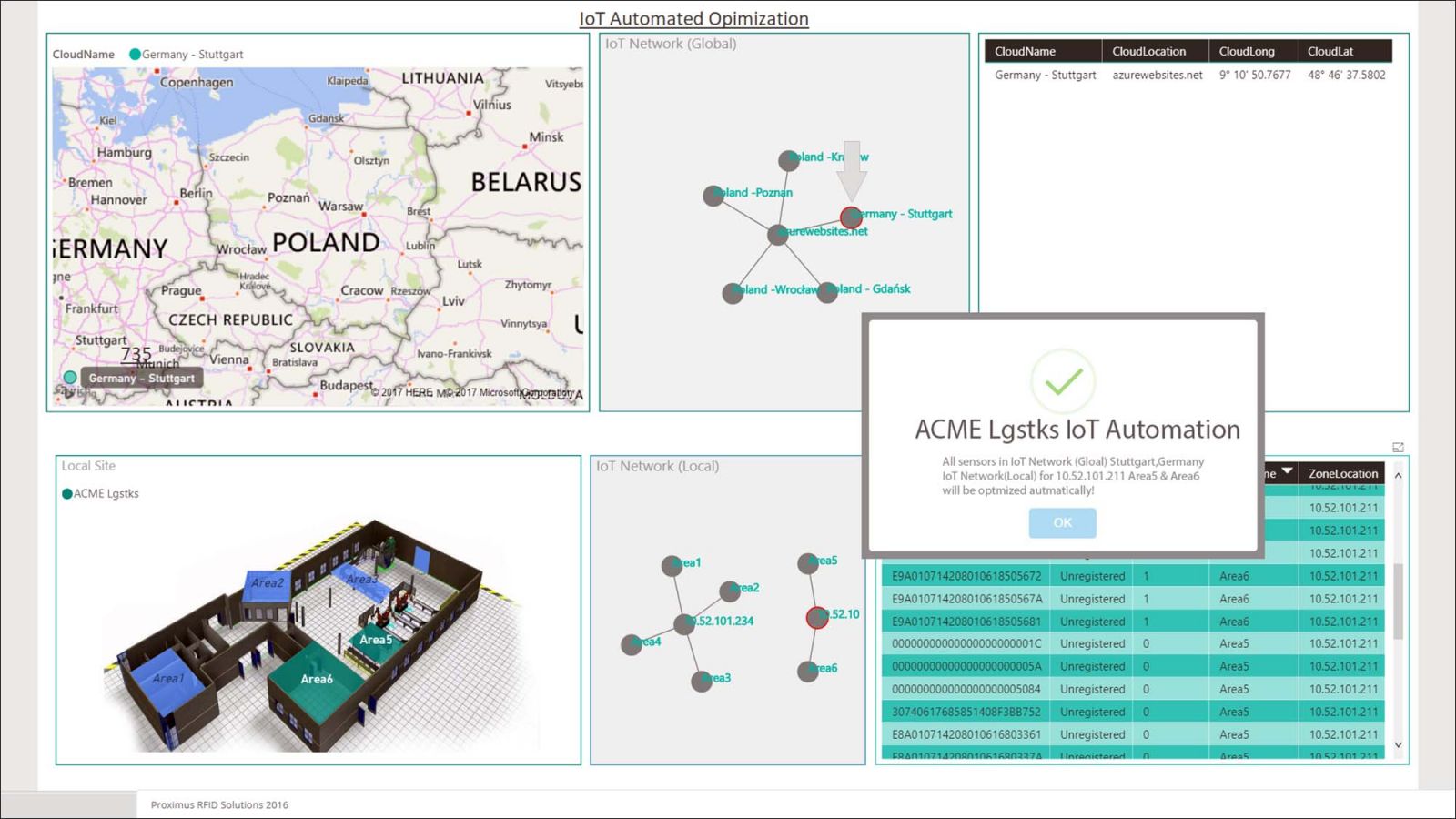 Initially, the technology company delivered the parcels in open carts, but Polish Post indicated that it wanted to test the RFID tag reads in metal-enclosed cages. Therefore, it tested them that way so as to make the tag reads more challenging. The tag read rate was higher than 98 percent in the metal cages, Sękowska says. As the tagged parcels moved throughout the facility along with the other untagged parcels, the tag IDs were read at each zone.

The ProxiTrak system collected a total of 60,000 read points during a span of two weeks. The postal company could then view the parcels’ movements around the facility. The software showed an icon indicating the location of any specific parcel, and users could view a line tracing the history of its movement. In this way, they could view not only where parcels were in the distribution process, but when bottlenecks occurred, or if a parcel was potentially being routed incorrectly.

Polish Post tested the system’s effectiveness with a stopwatch, manually timing when each parcel physically entered and left an area, and then matching that measurement with the ProxiTrak system. In some cases, Shull says, the results matched within a millisecond. “It was quite a big surprise for them that it worked so well,” says Sękowska, who was personally on hand for the entire pilot.

The next step for the postal company is to install the system at all of its warehouses, and to evaluate how to manage the large amount of data being collected by the RFID reads. “Technology is not enough,” Dulniak says. “A significant part of the work should involve the improvement of information systems supporting data acquired from monitoring devices. The next scheduled tests will indicate the directions that should be taken by our organization to maximize the benefits of RFID.”

According to Shull, ProxiGroup excels at building a system within a matter of days that can be easily expanded. “You don’t need a third-party site survey team,” he asserts. Instead, users can simply install a reader, drag an antenna icon to a particular zone in the software, synchronizing the virtual and physical infrastructure, and then let the software configure the read data accordingly. This also makes it easy to deploy a system across multiple geographic sites, Shull adds, and to manage the data from a remote location by simply accessing the cloud-based server.

The ProxiTrak platform is a significant help in the management of warehouse space. The system…